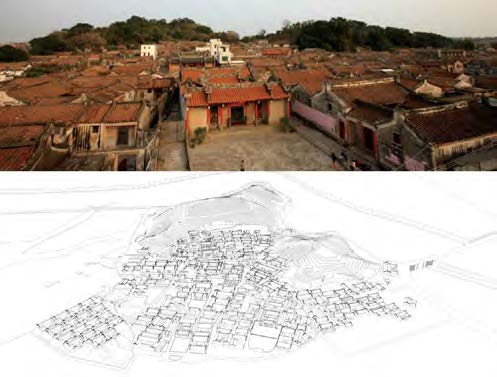 The theme of this lecture is “Tradition – Recreation”. The content is about the research of 5 traditional villages in China. The study not only look into the reappearing of townscape but also the main factors which affected the formation of these villages.

Xidi village in Anhui Province is a world heritage and is very famous. It’s a typical village which was built accord- ing to Chinese fengshui. At the beginning of planning, a fengshui master decides the location of all architectures, including all the villagers’ private houses and their cemeteries. In china, the best fengshui for a house is “sitting north and facing south” and “facing water with mountain behind”. It means that the house should face the south and the sea, river or lake and have hill or mountain on the other side. The layout of the houses in this village is affected not only by fengshui, but also the monsoon. The wall of the traditional houses is called “Horse Head Wall”, because the shape of the top of the wall is like a horse’s head. The ‘Horse Head Wall” is used to protect the houses from fire. There are also some important buildings in this village, they are water slot, ancestral hall, Ancestral House, temples, memorial arch and Confucius Temples. The roads of this village are snaky, they are narrow in some places, and wide in other places. So, it’s a very interesting experience when you walk through these roads. Furthermore, the waterways providing the water for daily life are also planned along the roads. The villagers can always make communications or have their meal near the waterways. As a result, the living space is extended to the outside area.

The second village is Hongcun which is also located in Anhui Province, 20 kilometers from Xidi village. It is also a world heritage. There are 2 big scale lakes in this village. One is called “Yuezhao Lake”. It acts as the heart of the village since it is the center for living and politics of the village. The other one is called “South Lake” which is located in the most southern part of the village. There is a complex water system like bowels. The water comes out from the water slot which is located in the higher place in the northern part of village. The water finally enters into the South Lake across each house and “Yuezhao Lake”. The water system which is providing water for the daily life of villagers, has many different kinds of connection with the traditional houses. Some waterways can even enter into the houses directly. In the traditional houses, there is an interior space called “Tangwu”. “Tangwu” is not only a living room, but also a multipurpose space that can be effectively used as a meeting room or a dining room. In olden days, Chinese women were not allowed to go outside. Thus, the decoration of the house is made to be very plentiful. Most of the decoration are trying to imitate the outside world.

Fenggang village is located in Guangdong provice. The special geography of the village forced the layout of the houses to abandon the traditional rules of fengshui entirely. In order to get the blessings from the ancestors, a fengshui master will arrange the residential zone in the eastern area, and the cemeteries in the western area. There are 4 ancestral temples that are called “Citang”, in Chinese, in this village. They are the centers of the village and belongs to 4 different families. Citang is like a cultural center, having the space to commemorate their ancestors, and displaying the ancestral memorial tablets. In front of the Citang, there is a plaza where it is a public space for all villagers. At the back of the Citang, there is a narrow road that serve as a private space.

Cai’s Old House is also a world heritage located in Fujian Province. In order to resist the outside enemies, the roads and houses were planned to be very straight and uniform. Under the influences of Confucianism, the whole layout of this village is based on the structure of the family trees. This village produces stones and is famous for the culture of red bricks. The main hall for the traditional house in this village, is not the living space, but the space to commemorate the ancestor. The spaces at the two sides of the house are the living spaces for servants. The central space belongs to the master as a living space. Four generations under one roof is very common in this village. The villagers are still using the traditional agricultural implementation and living goods. The delicate ground tile, facing material and window deco- ration are the unique features of this village.

Songkou village is also located in Fujian province. On the eastern side of this village is a big river. Because the village exported white Chinese ceramic in the olden days, the wharfs are still preserved. There is an unique wall and road in this village which are called “Hexing Wall’ and “Hexing Road”. That is because the shape for them is like a crane’s neck. At the moment, “Hexing Wall’ and “Hexing Road” have become famous sight-seeing spots due to their interesting shapes Besides the traditional commercial road, some modern commercial roads have been built in recent years. “Bakui House”, a typical traditional house of this village, occupies 2000 m2 and has 40 rooms. In front of this house, there is a big semicircle plaza which can contain over 100 people in the olden days. The firewalls of these traditional houses are made by rammed earth. The top of these firewalls were decorated by gray roof tiles. According to fengshui, no matter which yard you stand in, you can see the distant mountain. There are many buildings built in different periods. As time changes, little by little, the tradition of this village disappeared.

Based on the studies for these 5 villages, we got a new understanding of the tradition of China. Moving ahead, we will want to find out some ideas in culture that can be used for a better development of villages in China.