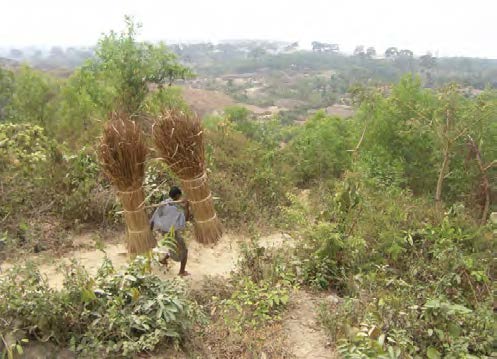 The research to explore the relationship between forest devastation and poverty in the Bangladesh Teknaf peninsula has been carried out in the last eight years, launched around 2009, by Professor Masakazu Tani as a project leader. From the standpoint of conservation of green spaces, surveys and reports were done to excavate the situation of homestead garden, forest vegetation and social forest. Since 2015, Prof. Tani has started the “Research on the Relationship between Forest Disappearance and Poverty in the Regional Ecosystem Framework” as “Fundamental Research (A) Overseas Academic Survey”. Riding on this research, the involvement in this study is more particular to the potential productivity of forest resource, that is to say, biomass productivity in the forest in a year. The purpose of the study is to calculate the human consumption and balance of biomass productivities. The village survey was carrying out by Prof. Tani’s laboratory and attempted to clarify if the consumption by stakeholders is large or the forest production is high. The design of the way of living for stakeholders and the design of forests will differ depending on their quantity.

While investigators are working to conduct the forest survey at the site, the initial hope of participation in this investigation was dismissed due to the terrorism attack in Dhaka. For the selection of the survey site, several areas have been chosen based on location and vegetation. Survey was carried out during the dry season in March 2016, the diameter of breast height of all trees in the study area were measured. Similar survey will be conducted in March 2017, in that sense, we will be able to know the amount of growth based on the data from the two time periods.

A female doctoral student from Bangladesh was enrolled into the laboratory. In order to capture the relationship between the landscape features and the lives of stakeholders, she divided the Teknaf peninsula in the catchment area and classified it from the digital information of the vegetation and geography as the survey unit. Depending on the location, there are a variety of areas, such as lands of homestead garden, land with plenty of forests, land with many plains, land with many mountains and so on. All these features may be regarded as Landscape characters. It is also believed that it would be possible to clarify the state of conservation and human utilization as regional ecosystems by researching the lifestyle of the stakeholders.