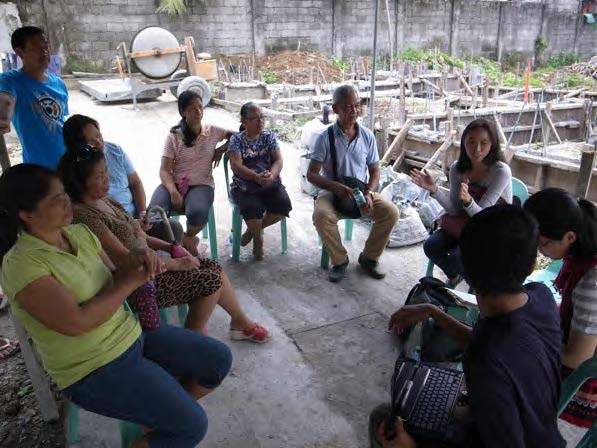 Presently the world population in slums reaches 1 billion making urban habitat an urgent global issue. In Metro Manila Philippines, 550,000 ISFs (Informal Settler Families), or 23％ of the total population, live in inferior dwellings in “Danger Zones” like on top and along waterways that suffer from flooding due to annual typhoons. Informal settler families in these danger zones are physically and socially vulnerable to disasters and poverty. For years, the Philippines government has responded to the housing needs of its ISFs through the conventional low-cost mass housing that is characterized by top-down, supply-driven, absence in basic and social services as well as livelihood programme. This results to abandonment or selling of housing units and returning to their cities of origin and to informally settle again.

However, reform has come. In 2011, the first community- led social housing project called “People’s Plan for High Density Housing” was introduced to the government. The project which was demand driven, bottom up, and aimed to build sustainable medium-rise socialized housing and living environment for the family beneficiaries. To date, 124 People’s Plan proposals with 51,215 ISFs beneficiaries have been submitted for funding by the People’s Organizations (POs). Of the 124, 12 projects have been completed and occupied by 4,685 family beneficiaries. The small number of approved and completed projects is attributed to weak community organization, insufficient specialists like architects that offer technical support to POs for housing designs and quality etc.

It is along this line that the TANOUE Lab is proposing a project that will endeavor to address these issues and will directly support the POs with the cooperation of PCUP (Presidential Commission for the Urban Poor), a government agency who is responsible in community organization and TAO-Pilipinas (a local NGO of architects) which specializes in participatory design and on technical and human resources.

Specifically, the project aims to generate a design or template for: a) small-scale, multifunctional community with spaces that foster community development; b) expansive housing unit that can be physically extended depending on the households’ financial situation or family’s life stage; c) attaching rental housing units for middle/high-income (mixed income/ mix-tenure) beneficiaries, or for allocating a portion for “commercial space”, both to generate community savings; and d) for building convertible common educational space to community playground.

This new approach to housing demonstrates that ISFs despite their inherent vulnerability to poverty and disasters, have the ability to address their security of tenure and livelihood issues and contribute significantly to achieving sustainable development in the country.